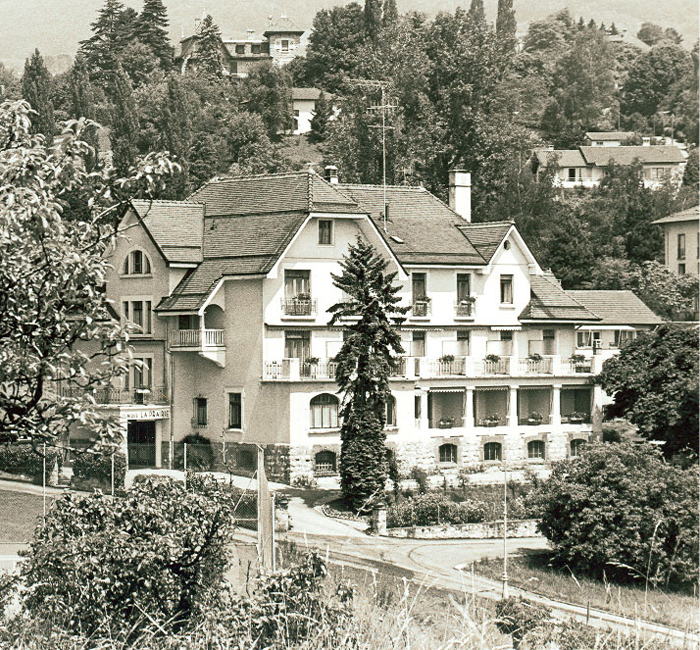 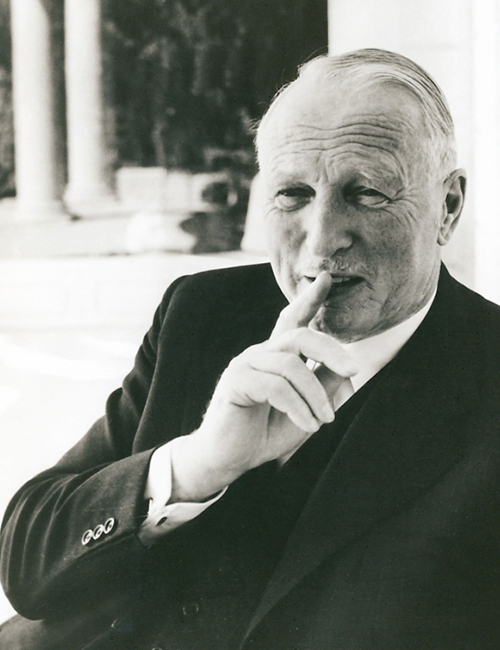 THE FATHER OF CELL THERAPY

More than 85 years ago, Paul Niehans first injected new cells into a convulsing patient. In doing so, he not only saved her life but also opened a new chapter in the history of an extraordinary medical institution which has gone from strength to strength ever since.

Paul Niehans is the father of cell therapy and of Clinique La Prairie as we know it today. His passion, humanity and ingenious instinct enabled him to foresee and uncover hitherto undetected mechanisms in living organisms, on which he worked to benefit the well-being and health of his fellow men despite opposition from his peers and a lack of scientific evidence to back up his methods.
A grandson of Emperor Frederick III of Germany, Paul Niehans was born on the 21st November 1882 in Berne. After taking courses in philosophy and theology, he went on to study medicine, specifically surgery and endocrinology, at the University of Zurich. Beginning his career as a medical officer, he was stationed on the Lake Geneva Riviera during the First World War, where he worked at the hospitals in Aigle and Vevey, and also at a small private establishment in Montreux, Clinique La Prairie.
From his earliest days in medicine, doctor Niehans was interested in biological research into the ability of cells to adapt. He was convinced that applying new cells from a young, healthy animal to the diseased and worn out cells of a human being could be beneficial. In the early 1920s he began performing targeted glandular transplants, becoming a European expert in the practice.
On the 1st April 1931, doctor Niehans was called to an emergency by a colleague at the cantonal hospital in Lausanne. A patient of around fi fty was in a life-threatening condition following the accidental removal of her parathyroid glands.

Paul Niehans quickly made his way to Lausanne with a parathyroid sample taken from a calf. However, the woman’s condition had deteriorated, making a transplant impossible. He injected an extract made from the organ he had brought with him into the muscle of the comatose patient. A few hours later she was fully recovered, and went on to live to the age of 89. Cell therapy was born.

Such was the excitement surrounding his “rejuvenation cures” that word even spread to the Vatican.

Professor Niehans continued to practise and develop his method, which soon received an unprecedented boon. Such was the excitement surrounding his “rejuvenation cures” that word even spread to the Vatican. In February 1953, doctor Niehans was summoned to the bedside of an ailing Pope Pius XII. At the request of His Holiness’s doctors, he administered cell therapy. The Pope recovered and news spread around the world, fi rmly establishing the therapy of Doctor Niehans in the consciousness of an evergrowing public.

Gérard Fontaine, a former laboratory manager and head of radiology at Clinique La Prairie, recalls the thousands of letters that began arriving at the clinic: “People from all walks of life wanted to see this now famous professor. But he would only answer the shortest letters, with an even more concise message his own: “I’ll see you on a Monday, with an empty stomach”. So, every Monday, twenty, thirty, forty people would turn up at the clinic asking to see the doctor. Some would wait all day, others for several days, but none would leave without meeting him. At that time, the clinic was nowhere near as comfortable as it is today. The Residence only had fifteen rooms, and most had no bathroom. Patients were put up in local hotels and came for a daily consultation to receive their treatment.
The results of the cell therapy were astonishing. People regularly came back, and always expressed their satisfaction. But Paul Niehans was under constant attack from his peers. There was no scientifi c evidence for the efficacy of his methods. In 1960, he founded the International Society for Cellular Therapy Ethics, however he was still forced to resign from the Vaud Society of Medicine. In spite of everything, Doctor Niehans never gave up, and right up until his death in 1971 at the age of 89, he retained his faith in the scientifi c validity of cell therapy.

The fi rst scientific evidence for the effects of Revitalisation was presented by Professor Otto Westphal. 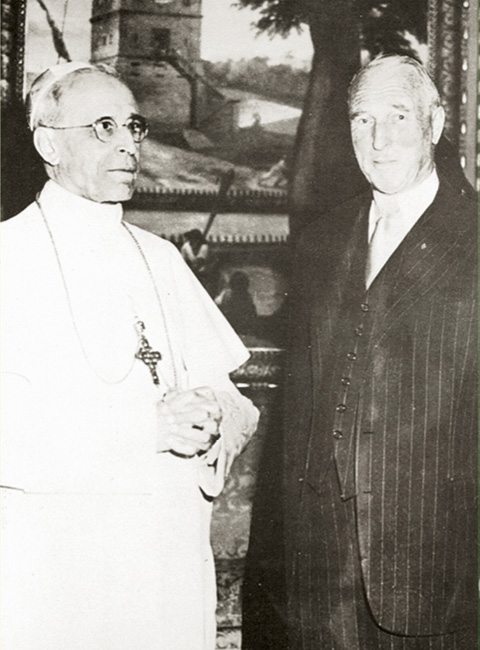 In February 1953, Dr. Niehans was summoned to the Vatican to administer cell therapy to an ailing Pope Pius XII.
The treatment was a success, quickly earning Clinique La Prairie a worldwide reputation. 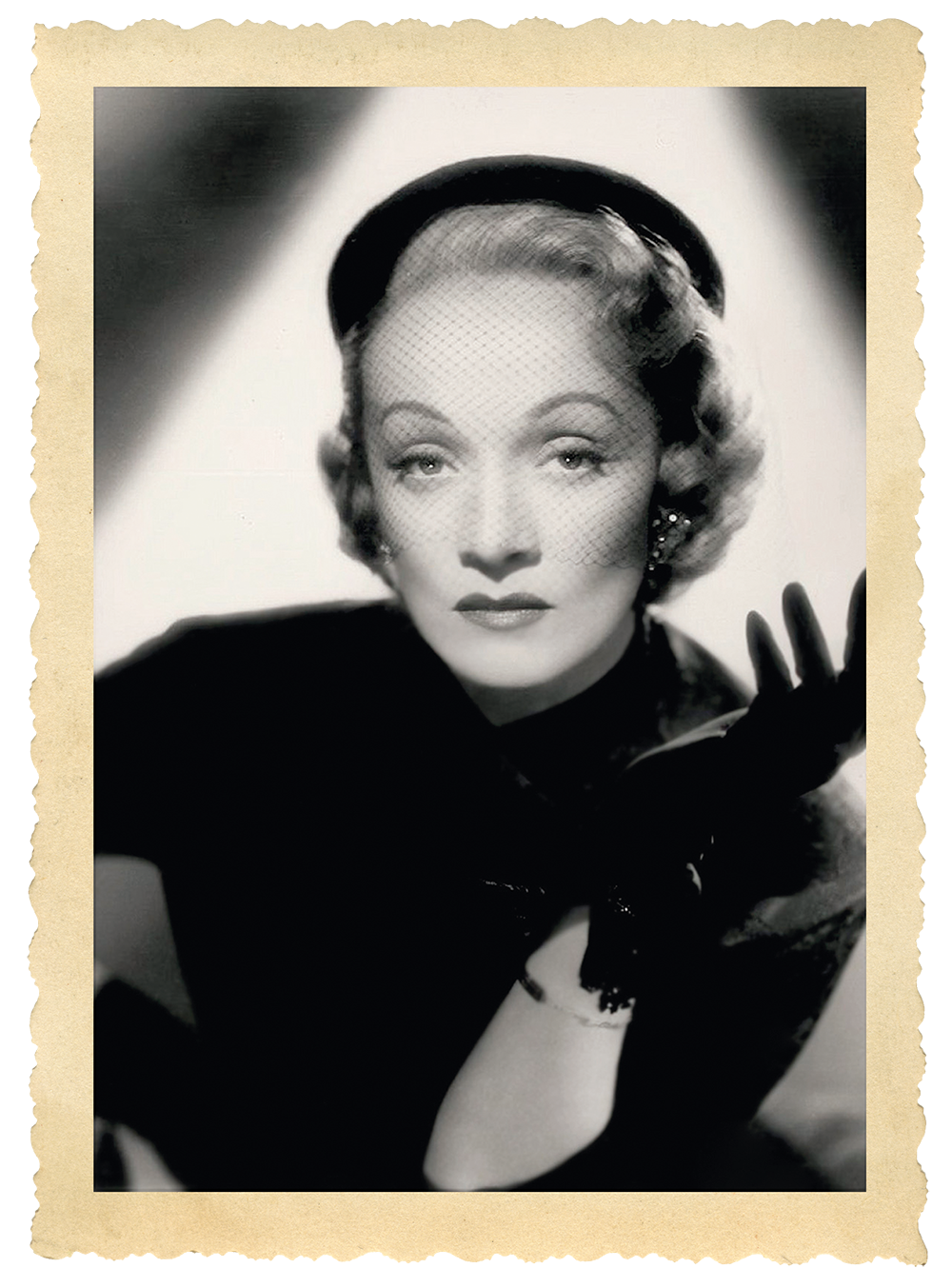 FAMOUS PATIENTS
Among the thousands of patients treated by Doctor Niehans, a number of famous faces have visited Montreux in the strictest confi dence: The British Prime Minister, Winston Churchill; the German Chancellor, Konrad Adenauer; the American President, Dwight D. Eisenhower; General de Gaulle; King of Yemen, Ahmed I; King Ibn Saud of Saudi Arabia; the Duke and Duchess of Windsor; and also artists including Miles Davis, Georges Braque and Pablo Picasso, not to mention stars such as Marlene Dietrich, Romy Schneider and Marilyn Monroe.